Everyone loves images. They make virtually any article look better, brightening the mood and making it more fun to read.

As such, there are many formats for images to help them display properly depending on your browser or website you’re viewing/posting it in. This post will discuss a few of the most common image formats and their use.

The JPEG is probably one of the more commonly used formats and has become quite popular over time. The JPEG was created to only maintain quality in areas that need it during compression and was not intended to be an overall file size saver. However, it has been compared to other image formats such as GIFs and PNGs, which we will get into later.

One big problem with JPEGs is that there is no transparency. Transparency provides an image with a background to blend into whatever may be behind it, but this is impossible with JPEGs; there will always be one solid color for the background, which will be shown if placed on top of something like white or black.

JPEGs are commonly used for images that will not have any transparent areas, such as photographs, medical applications, and newspapers where the photos need to look their best.

The GIF was created by CompuServe in 1987 and has gained popularity ever since then because of its ability to create animation loops (animated GIFs).

The GIF file extensions stand for “Graphics Interchange Format” and were intended to be a more compressed and efficient way of displaying images with 256 colors or less. 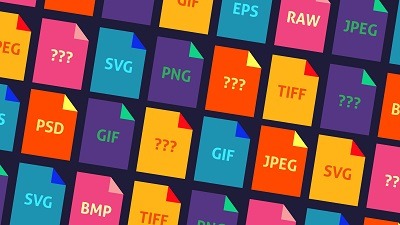 GIFs can also be transparent, which is a huge plus, but they have some disadvantages. They are not as compressed as JPEGs, so the file size tends to be larger.

Secondly, GIFs can only support animation loops up to 256 frames or “images” maximum. So if you want to create an animated GIF with more than 256 frames, you will need to convert it into another format.

GIFs are commonly used for creating simple animations, logos, and buttons on the web.

The PNG was created in 1996 as a response to the shortcomings of the GIF format. PNGs were designed to be a more efficient and compressed image format with better color depth than GIFs. PNGs can also be transparent, but they do not support animation as GIFs do.

One significant advantage of PNGs over JPEGs is that they are lossless; when a PNG is compressed, the quality of the image does not decrease as it does with JPEGs.

PNGs are commonly used for logos, buttons, screenshots, and other images where high quality and transparency are needed.

The TIFF was created in 1986 to be an open standard file format that would put all other formats to shame in terms of quality, color depth, and compression capabilities.

However, the only problem with this is that since it is an uncompressed image format, the files tend to be large compared to other file types such as JPEGs and PNGs. The TIFF file extensions stand for “Tagged Image File Format.”

That means you can give images a lot more information than any other image format, which is very useful in specific applications such as scanning or archiving images.

TIFFs are commonly used mainly where there needs to be high-quality color deepness.

The BMP was created in 1983 by Microsoft and is a bitmap image format that can be uncompressed or compressed into an RLE compression scheme.

The biggest downside with the BMP is that it supports only up to 16.7 million colors, which makes them better suited for images such as monochrome (black and white) or color line art rather than photographs.

BMPs are commonly used for line-art images where the quality of color isn’t required.

The SVG was created by Adobe Systems in 1999 and has become more popular ever since then because of its lightweight file size compared to other file types like JPEGs and PNGs, which are used for graphics.

The SVG file extensions stand for “Scalable Vector Graphics,” meaning that the files are small in size and scalable because of how vectors work.

This makes them suitable for logos rather than bitmaps because it allows the image to be scaled to any size while retaining its sharpness and quality.

SVGs are commonly used for logos where scalable vector graphics are necessary.

The WEBP was created by Google back in 2010; it has become quite popular due to its ability to drastically reduce file sizes compared to other image formats like JPEGs which tend to result in large file sizes when images with a lot of data are compressed.

One of the biggest downfalls is that it only supports images up to 48-bit (16.78 million colors), which means that not all image types can be saved as WEBP. However, the most popular images such as photos, PNGs, and JPEGs work with WEBP just fine without any significant decrease in quality or increase in file size.

WEBP also has support for transparency which allows you to choose between having a transparent background or loading an overlayed alpha matte layer on top of your image.

WEBP is commonly used where large amounts of data need to be stored in fewer bytes than other formats without compromising quality.

The EPS was first created in 1986 by Adobe Systems and is commonly used for scalable vector graphics. Its main purpose is to store an image as a series of lines, arcs, and curves rather than pixels like most other formats do.

That makes it suitable for images that require more precision than just blocky pixels, such as logos or line art images. One of the biggest advantages of using an .EPS file extension is that you can rescale the image without losing quality.

That means if your website’s layout changes, you won’t have to go back and update your images since they will always look perfect. The only downside is that it doesn’t support transparency, so any areas you would like transparent need to be white.

EPSs are commonly used for logos where vector graphics are necessary and more precise images are desired.

There are various image file types available for use, and each one has its strengths and weaknesses. It’s important to understand what each format is capable of so you can choose the right one for your needs.

However, there are many other image formats available, and each one should be considered depending on the specific needs of the image.